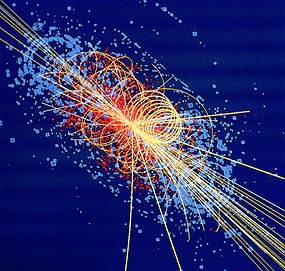 The Higgs Boson Particle – Discovery and SignificanceThe Higgs Boson particle has definitely gotten the scientific world all excited. Its discovery has actually been in the process for decades but it is only this year that the existence of the Higgs-Boson has been verified without question. Dubbed as the “God Particle”, some may say that this is the Holy Grail of physics.

What is Higgs Boson?

Prior to tracking the discovery of the Higgs Boson particle – which spans roughly 50 years – this article will first discuss exactly what this particle is. See, it was always believed that the atom is the smallest particle making up an element. During the 1960’s however, physicists managed to break up the atom and found out that it was made up of even smaller particles called protons, neutrons and electrons. Physicists went further, however, and decided to smash those up – resulting to the quark.

This is where the Higgs Boson comes in. Scientist Peter Higgs puts forward the theory that there is that one particle that is responsible for adding mass to matter. According to Higgs, this particle is responsible for creating an invisible field or Higgs Field that manages to bind the other particles together to produce mass. This top particle or “God Particle” is the Higgs Boson.

1964
Up
Along with two other teams, Peter Higgs put forward the idea of a “Higgs Field” and theorized the existence of the Higgs Boson.
1993
Up
The term “God Particle” was used when referring to the Higgs Boson in reference to a 1993 book by Leon Lederman. The book also discussed the existence of Higgs Boson but many physicists are unhappy with the mainstream name. This isn’t really surprising since the qualities of the Higgs Boson are nowhere near replicating God or any other mystic subject.
1995
Up
Although the Higgs Boson is an important element for the verification of the Higgs Mechanism, it isn’t the only one. In1995, physicists managed to use the Standard Model in predicting and discovering the top or heaviest quark in the atom. This was done by Fermilab using the Tevatron particle accelerator.
2000 to 2004
Up
The experiments from the Large Electron-Positron collider published information that set boundaries for the discovery of the Higgs Boson. According to the data, the dubbed “God Particle” has a lower bound of 114.4 GeV/c2 at a 95% confidence level.
2007
Up
The introduction of the LHC made it possible to narrow down the area of interest for physicists. Compared to other accelerators, the LHC is capable of colliding higher energies, increasing the chances of Tevatron to find the Higgs Boson. At the same time, Fermilab decreased the upper limit of the search to 1534 GeV.
2009
Up
During this year, Tevatron announced that they have a 50% chance of finding the Higgs Boson by the end of year 2010. They were however, unable to prove the existence of the particle throughout the year.
April 24, 2011
Up
There were rumors that the God Particle has been found but this was tagged as false the following month. Although not completely a hoax, the results were unverified and therefore not believable.
July 24, 2011
Up
LHC reported some signs that could possibly lead to the discovery of the particle. According to the ATLAS Note, the particle was in a low mass range between c.120 to 140 GeV. Tevatron echoed these findings, citing 140 GeV as the mass to pay attention to.
August 22, 2011
Up
Additional data provided 95% certainty that the Higgs Boson is NOT residing between 145 and 466 GeV.
December 13, 2011
Up
ATLAS and CMS experiments limited the range of the Higgs Boson particle, allowing for a more focused research. According to the ATLAS experiments, IF the particle does exist, then it can be found between the 116 to 130 GeV. According to CMS however, the particle is between 115 to 127 GeV.
July 4, 2012
Up
Experimental team from ATLAS and CMS revealed that they found a particle whose characteristics correspond to the description of the Higgs Boson. The boson has mass between 125 to 127 GeV/c2.The Moment: CERN Scientist Announces Higgs Boson ‘God Particle’ Discovery[1. Jay Turner]

The series of tests and experiments correspond to the necessary requirements for announcing a new particle. Although the newly discovered particle carries all the characteristic of the Higgs Boson, further analysis is needed for verification.

Why is This Important?

The verification of the existence of the Higgs Boson is an important event in physics. It will provide further insight in man’s understanding of the universe and could even pave the way for more discoveries and scientific developments. More importantly, the existence of the Higgs Boson is one of the crucial elements that bind the Higgs Mechanism and Standard Model theorems. If it was proven that the “God Particle” did not exist, physics will need to reevaluate some aspects of the science.