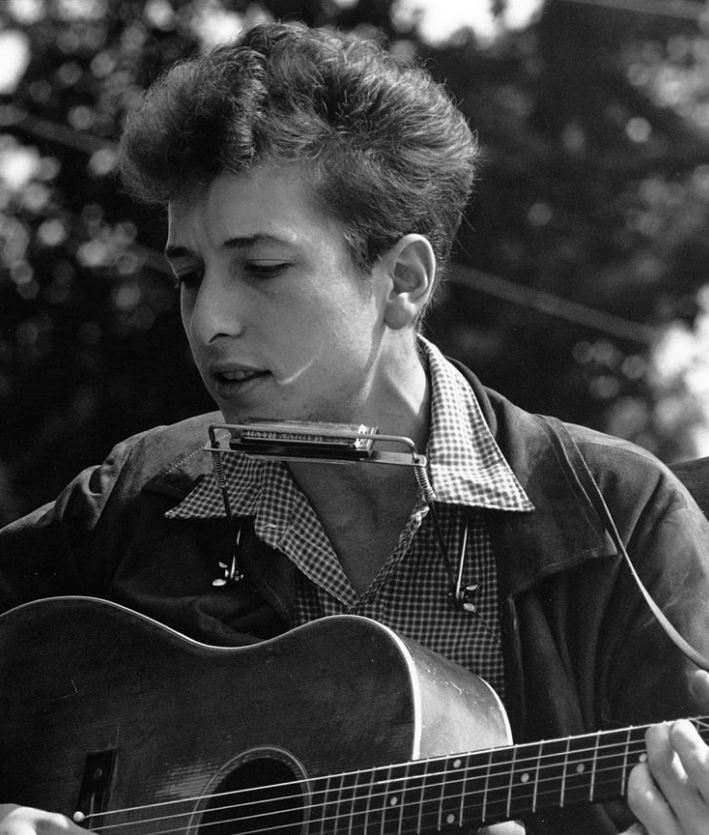 1961:
Bob Dylan starts his career by relocating to New York City after dropping out of the University of Minnesota after his freshman year. He begins performing at various folk clubs around Greenwich Village, befriending other folk singers and gathering material. Dylan records his first, self-titled album at Columbia Records, which consists of mostly covers of familiar folk, gospel and blues songs with two original compositions. “Bob Dylan” sells just 5,000 copies during its first year of release, prompting many at Columbia to consider dropping him.
1963:
Dylan’s second album, “The Freewheelin’ Bob Dylan,” gets released. The album contains eleven original compositions including some of his most famous songs, such as “Blowin’ in the Wind,” which becomes a sixties anthem, “Don’t Think Twice, It’s Alright,” and “A Hard Rain’s a-Gonna Fall”. It reaches #22 on the US album charts, eventually goes platinum and was one of the first recordings added to the National Recording Registry.
1964:
“Times They Are a-Changin’”, Dylan’s third album, is released. The title track is one of Dylan’s most famous compositions, which many critics felt perfectly captured the social and political upheaval of the period. It entered the US album chart at #20 and eventually went gold. “Another Side of Bob Dylan” is released in the same year, and featured a lighter tone, with romantic songs such as “To Ramona” and “Spanish Harlem Incident” as well as the popular “It Ain’t Me Babe,” which was covered by artists as diverse as Johnny Cash, Joan Baez and Nancy Sinatra.
1965:
“Bringing It All Back Home,” Dylan’s fifth album, incites a fierce controversy among his fans because it featured his first use of electric instrumentation in his recordings. Included in the album are songs like “Mr. Tambourine Man,” one of Dylan’s most popular compositions which became a hit for the Hollies, “Subterranean Homesick Blues” and “It’s Alright Ma (I’m Only Bleeding)”. Later that year, Dylan headlines the Newport Folk Festival, performing a set backed up by an electric band and being met with a mixture of cheers and boos, which prompts him to walk offstage after just three songs. He releases the single “Like a Rolling Stone,” a six minute recording that has been seen as influential in changing people’s attitudes about what a pop song could convey. The song headlines the album “Highway 61 Revisited” which features other Dylan classics such as the title track, “Just Like Tom Thumb’s Blues” and “Ballad of a Thin Man”.
1966:
Dylan releases the double album “Blonde on Blonde,” which was mainly recorded in Nashville. Some of the songs that appeared on the album include “Just Like a Woman,” “I Want You,” “Rainy Day Women #12 & #35” and “Visions of Johanna”.  The album reached #9 on the Billboard Top 200 album charts and produced two top 20 singles.
1972:
After a serious motorcycle accident that temporarily sidelined him and producing material that many critics felt was of unpredictable quality, Dylan released the song “Knockin’ On Heaven’s Door,” for the movie Pat Garrett and Billy the Kid, in which he also appeared in an acting role. It becomes one of Dylan’s most covered songs with versions from artists ranging from Guns N’ Roses to Avril Lavigne.
1975:
“Blood on the Tracks,” Dylan’s fifteenth album, is released. Although it initially received critical reviews, the album has since been recognized as one of Dylan’s finest recordings. It is also one of his best-selling, reaching #1 on the Billboard album charts and being certified double-platinum. He also releases an eight minute and thirty-two second recording championing former boxer Rubin “The Hurricane” Carter, who was unjustly convicted of a triple murder.
1979:
After becoming a born-again Christian in the late seventies, Dylan releases “Slow Train Coming,” an album of gospel music that went platinum. It also produced a hit single, “Gotta Serve Somebody,” which cracked the Top 30.
1988:
Failing to achieve commercial success with his own recordings, Dylan co-founds The Travelling Wilburys, a supergroup whose members included George Harrison, Tom Petty, Roy Orbison and Jeff Lynne of the Electric Light Orchestra. Their premiere album, Travelling Wilburys Vol. 1, sold two million copies in the US within the first six months of its release and was eventually certified triple-platinum. Critics feel the album features some of Dylan’s most accessible compositions in years.
2001:
Dylan wins an Oscar award for Best Original Song for his self-performed composition, “Things Have Changed,” which appeared in the film Wonder Boys.
2009:
“Together Through Life,” Dylan’s thirty-third studio album, is released. The album becomes Dylan’s first to reach number one in the US and UK album charts consecutively, and he becomes the oldest artist (at 67) to reach number one on the Billboard Hot 200. He also releases his first Christmas album, “Christmas in the Heart,” whose royalties Dylan donated to the charities World Food Programme, Crisis (a UK homeless charity) and Feeding America.
This Timeline Need’s A Curator. Could that be you? Ask us if this timeline is right for your curation via our contact us page.