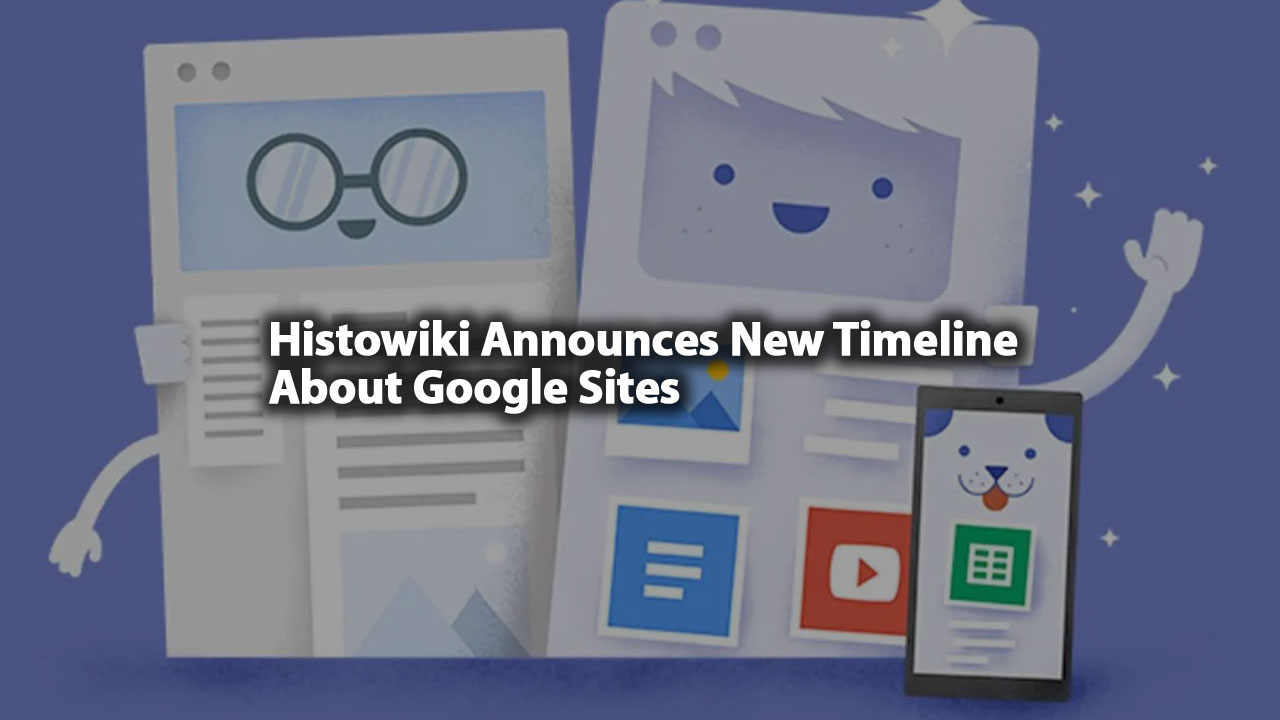 The latest timeline highlights feature changes to Google’s entry into the website platform space, as well as it’s “origin story”.

This timeline includes interesting factoids such as the fact Google Sites started out as JotSpot. On February 28, 2008, Google Sites was unveiled using the JotSpot technology for free with a domain purchase clearly trying to grab users from competitors like WordPress. That was changed to 100 percent free without a domain in May of that same year. Google Sites was originally described as a tool to “quickly gather a variety of information in one place – including videos, calendars, presentations, attachments, and text – and easily share it for viewing or editing with a small group, their entire organization, or the world.”

From Google’s own help page, that asked the question:

What can you do with Sites?

“When you create a new site, it’s automatically added to Drive, like your other files stored in Drive. You can edit a Google Site together with someone else in real time, and see each other’s changes live. Publish the site for everyone to see, or restrict sharing permissions and make the site accessible only to people you want to share it with, like vendors or suppliers.”

Google Sites websites are responsive, which means they’re optimized for tablets and smartphones, too.

The platform has had many upgrades since it’s 2008 launch that coincide with the majority browsing by users moving from their desktops to mobile devices. Google made the right move in making sure websites built with Google Sites were changed with that behavior, to be “responsive” to smaller screens.

One of Google’s advantages is it’s integration with Google’s GSuite which was first launched in 2006 as Google Apps for Your Domain. An oft-used comparison for Gsuite and all it’s functionality is “Microsoft Office meets Cpanel”.

See more excerpts from the timeline, below.

August 2004, Google moved to the public sector, getting a listing on the stock exchange. It started at $85 per share and raised $1.9 billion.

2006, Google Apps for Your Domain launched.

February 28, 2008, Google Sites was unveiled, using the JotSpot technology for free with a domain purchase.

May 21, 2008, Google Sites became available for free, separately from Google Apps, and without the need for a domain.

October 2009, Page Templates feature is added. Users can define default content as well as settings, like layout, that other collaborators can use when they create a new page. Ability to subscribe to an RSS feed from an ‘announcements’ page.

February 2012, Google grabs nearly half of the 40 billion online views in the month of January, on the strength of video views from the YouTube platform.

October 1, 2014, Google to offers schools and students unlimited storage on Google Drive for free, a smart move that brought in a large pool of active users to all Google Drive connected apps like Google Sites, and MyMaps.

June 2016, Google introduced a complete rebuild of the Google Sites platform, named New Google Sites and does not use JotSpot technology.

November 2016, Google Site’s Web Design tool is updated to use the Material Design language, with upgrades including 6 themes and built in Google Analytics integration. No more gadgets. No more complex columns and sidebars. No more page-level access permissions. No more discussion forums.

August 6, 2020, Announced that starting August 13, 2020, new Sites created in Google Sites will become the default option for website creation. This means that if you have both classic Sites and new Sites enabled, when users go to sites.google.com, they’ll be redirected to sites.google.com/new