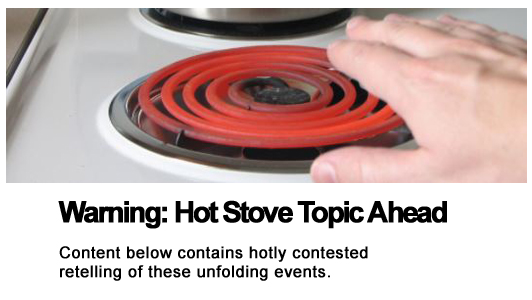 Now The New York Times is reporting that Clinton used a personal email account to conduct government business as secretary of State, an apparent violation of federal requirements that her records be retained.

Exposed by a House committee investigating the Benghazi Consulate attack, Clinton brazenly dug in her heels. Advisers reviewed tens of thousands of pages of her personal email and decided which ones to release: Just 55,000 emails were given to the State Department.

Those are our emails, not hers. What is she hiding?

Wallace to Davis: Do you ever get tired of cleaning up Clinton messes?

CSpan: Hillary Clinton Personal Email Account
Former Secretary of State Hillary Clinton, a likely 2016 presidential candidate, spoke to reporters and responded to questions about her use of a private electronic mail account during her time at the State Department. She said her decision to use the account was for the convenience of carrying only one device and it “didn’t seem like an issue.” She also said that looking back that using a second e-mail account and carrying both a government and a personal device might have been better. She spoke at the United Nations following an event on women’s rights hosted by the U.N. and opened her remarks by talking about women’s rights. She also commented on the letter sent by Republican senators to Iran.
Hillary Clinton Press Conference in it’s entirety

NOTHING CLASSIFIED? REALLY? No Classified Emails by Clinton? Some Experts Are Skeptical

Maddow: Media idiots don’t ‘know how to talk about’ the Clintons | Hotair.com

MICHAEL KELLY: I BELIEVE IT ALL… | The Drudge Report

This is not the first time Team Clinton got caught trying to hit the “delete” key…http://t.co/gCBNDNPmFU #HillaryEmail

Stewart: one email account to avoid inconvenience YET “you know what’s an even bigger pain in the ass? Deleting 30,000 emails” — Jake Tapper (@jaketapper) March 12, 2015

Inspector general finds “a reluctance to use record email because of possible consequences” in State Dept http://t.co/oCYKlEJCPe

@instapundit on Hillary email: “If the coverup is this embarrassing, what’s being covered up must be much worse.” http://t.co/mrGKbpaPkx — Roger Kimball (@rogerkimball) March 14, 2015

Question for #Mediabuzz: Has the Hillary email controversy become an important story or just a media obsession?

Trey Gowdy On Hillary Emails: ‘We Haven’t Seen Any Evidence Of A Crime’ | @HuffPostPol

James Carville on @ThisWeekABC says he “suspects” @HillaryClinton used private email b/c she didn’t want Hill oversight. Quite an admission

Gowdy: “I give credit to the New York Times reporter. It wasn’t our committee that uncovered that, it was a reporter” http://t.co/0jzwsXYn56 — Virginia Postrel (@vpostrel) March 16, 2015

So Hillary appointed “investigators” to the Benghazi Accountability Review Board and they never interviewed her or looked at her emails.

Hillary Rodham Clinton e-mailed her staff on an iPad as well as a BlackBerry while secretary of state, despite her explanation she exclusively used a personal e-mail address on a homebrew server so that she could carry a single device, according to documents obtained by The Associated Press.

A House panel Tuesday formally requested Hillary Clinton to testify about the private server and email account she used while serving as secretary of state.

Rep. Trey Gowdy, chairman of the Select Committee on Benghazi, sent a request to Clinton’s personal attorney, David E. Kendall, requesting that Clinton appear before the committee no later than May 1 for a transcribed interview about the server and email.

Could @HillaryClinton have dreamed of a better conversation-shift from email servers than Indiana RFRA?

Clinton gave the State Dept. printouts of her emails in 12 ‘banker’s boxes’. Some pages were double-sided. http://t.co/vXbX6AD0aK

May 19, 2015: Clinton Email Case Gets Nutty: Clinton Offers Faux Support For Faster Release… That She Could Have Done Herself | @Techdirt

That NYT piece doesn’t mention it but Sid Blumenthal was using an AOL account to send Hillary these intel briefings. http://t.co/AXiQPjJWwj — Jimmy (@JimmyPrinceton) May 19, 2015

.@LarrySabato 1) These are her cherry-picked emails. 2) That means there will be nothing revealing. 3) Clinton declares herself exonerated.

BUT HILLARY AND BARACK KNEW AND DID NOTHING: U.S. Intel Knew Weapons Were Being Moved From B… http://t.co/BVHSNUzifI via @instapundit — Instapundit.com (@instapundit) May 19, 2015

Sidney Blumenthal releases a statement through his lawyers pic.twitter.com/iZxNEcyx6Y — Zeke Miller (@ZekeJMiller) May 22, 2015

1/ Confirmed: Blumenthal was copy-pasting Tyler Drumheller’s memos, fed them to Hillary who them fed them to State pic.twitter.com/EXf3wzusq6 — Cuffy (@CuffyMeh) May 21, 2015

2/ And who is Tyler Drumheller, you ask? Here –> http://t.co/dvMKPHDqLT via @MonicaCrowley

Blumenthal blamed Benghazi attack on protesters in email to Clinton http://t.co/04DNSAFWrq via @POLITICO

Clinton Falsely Claims State Dept. Had “Vast Majority” Of Emails Prior To Her Turning Over Emails https://t.co/bbQJoqP0bl

“Blumenthal’s job at the foundation —mostly concerned with President Clinton’s legacy” http://t.co/czcoJVzzRb / I thought it was a charity

Two days after the 9/11/2012 terrorist attacks in Benghazi, Libya, the United States embassy in Tripoli, Libya, was warning the State Department via email not to conflate the Innocence of Muslims YouTube video with the attacks.

Colleagues, I mentioned to [redacted] this morning, and want to share with all of you, our view at Embassy Tripoli that we must be cautious in our local messaging with regard to the inflammatory film trailer, adapting it to Libyan conditions.

Our monitoring of the Libyan media and conversations with Libyans suggest that the films not as explosive of an issue here as it appears to be in other countries in the region. The overwhelming majority of the FB comments and tweets we’ve received from Libyans since the Ambassador’s death have expressed deep sympathy, sorrow, and regret. They have expressed anger at the attackers, and emphasized that this attack does not represent Libyans or Islam. Relatively few have even mentioned the inflammatory video.

So if we post messaging about the video specifically, we may draw unwanted attention to it. And it is becoming increasingly clear that the series of events in Benghazi was much more terrorist attack than a protest which escalated into violence. It is our opinion that in our messaging, we want to distinguish, not conflate, the events in other countries with this well-planned attack by militant extremists. I have discussed this with [redacted] and he shares PAS’s view.

The total so far is 1,274 classified emails, debunking Clinton’s claims that she never sent or received such info on the account run from the private, unsecured server in her home. Politico: “No Bombshells So Far”

Clinton gets hit with email scandal question at the rope line  | politico.com

Somehow, highly classified information from SIPRNet, as well as even the super-secure JWICS, jumped from those closed systems to the open system and turned up in at least 1,340 of Clinton’s home e-mails — including several the CIA earlier this month flagged as containing ultra-secret Sensitive Compartmented Information and Special Access Programs, a subset of SCI.

Do you have a correction or valuable addition to the timeline? Context matters! And as you can see above, a Timeline reveals interesting angles. If you think this timeline is incorrect, omits important info, or is biased, YOU can correct it! Click here and help this timeline’s curator get the history right!